During this quarter I learned about constitution in Indonesia. I learned about the politicians in Indonesia who work to stop corruption. For this quarter, our project was the debate. My debate team was Nadia and Sam. Our case is about Angelina Sondakh’s corruption, and we are in the pro team. We have to support her actions and defend her. As I research about her corruption case, we also relate it with human rights and UUD. Our strongest support was from the human rights.

Angelina was held in the prison, leaving her kids. This is crossing the human rights, that kids have the rights to be loved by their parents. The ministers had put Angelina in the prison, leaving her kids without a father. I also think that Angelina needs support because her husband just died a few years ago. Although I’m in the pro team, corruption is still bad and it's a sin. In civics, I also learned about the deviations during the making of UUD.

In quarter two, we also continued learning about the constitution. We learned the theories from the book in chapter 2. The articles is about the changing of constitution that happened since the UUD 1945. I learned about how and why the government and ministers changed it. Some of the reason was because the community doesn't accept it. I also learned about soekarno who was the first president of Indonesia and how he affects the constitution. President Soekarno was president for almost 20 years. Because of this, the ministries and government decided to have a rule that the maximum period of being the president is 10 years.

In the last week, we had the test about constitution. I think it was really hard because I didn't memorize all the verse in the UUD 1945. 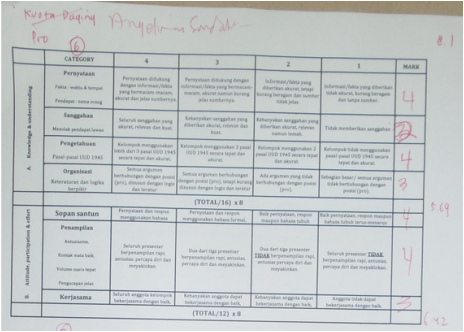 In this debate, I am on the pro team. My team members are Nadia and Sam. Our score is 6, and I think it's because we state our arguments clearly. I think we can get a higher score if the teacher gave us more time on the debate so we can give more arguments that will make our statements stronger.